Ralph, new in the program, was walking in the woods thinking about his new sponsor's urging that he think seriously about getting a Higher Power. After a life of atheism, Ralph decided taking up a faith in some kind of deity would be rank hypocrisy, so he decided to do without. Besides, it was a beautiful day in the woods, the sun was shining, the birds were singing, the leaves on the trees above him whispering in soft warm breezes. Wasn't that spiritual?
Just then Ralph heard rustling in the bushes behind him. He turned and saw an eight foot grizzly bear charge toward him. Running as fast as he could, Ralph glanced over his shoulder and saw that the bear was closing on him. Just then he tripped on an exposed root and fell on the ground. He rolled over and saw that the bear was over him, roaring, its huge clawed paws waving over its head the bear ready to strike. 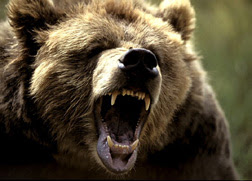 "Oh, my god!" cried Ralph.
Time stopped.
The bear froze.
All was silent.
As a bright light came from the sky, Ralph heard a voice say, "Didn't your sponsor tell you to get a Higher Power? Are you ready for one now?"
Ralph was consistent, if not sensible. "It would be hypocritical of me to change my whole life and suddenly ask a god, which you seem to think you are, to protect me." The bear was still up there, however, claws poised to tear Ralph to pieces, drool still dangling from the tips of the beast's teeth. Ralph happened upon a way to work around all the Higher Power/menacing bear stuff.
"So," prompted the voice, "am I your Higher Power now?"
"No. I'm not ready for that just yet. But maybe you could make the bear a Christian?"
"Very well," said the voice."
The light dimmed.
The sounds of the forest resumed.
The bear looked confused for a moment, then bowed its head, put its paws together, and said, "Lord bless this food, which I am about to receive from thy bounty through Christ our Lord, Amen."