Looking For The Light

Were there ever before three words calculated to piss off people quite as much as "Had enough yet?" To the person using those words, he or she is looking at someone in an incredible amount of pain and well down the road to the destruction of everything and everybody of value to the one being asked.

To the using addict, though, the view is different. "Yeah, I'm in a lot of pain, and things are coming apart pretty much, but you want me to quit using the only answer I've got. You just don't understand."

No. We do understand. We've all been there. The difference is that we have learned that when the only answer you've got is to use the stuff that's causing all the problems, that is the definition of late stage addiction.

The answer, of course, is pain; Lots and lots of pain. Pain can turn on that lightbulb, and the hope is that the light goes on before death turns it off forever.

Uh huh. I was once on a designer-drug panel at a science fiction convention. One of the speakers there said something quite remarkable: "I've been using this drug for over fifteen years, and I'm not addicted."

Believe it or not, using drugs is not really good evidence that you are not addicted to drugs. I know it's unfair, but that's the way it is. If you want to test whether or not you're an addict, put down the drug. No booze, no chemicals, no gambling, no other obsessive-compulsive behaviors (gambling, overeating, raging around, being a destructive bastard, etc.) and see how it fits. Try being addiction free for a few years and see what happens.

If you aren't addicted, then you don't "need" the booze, joint, pill, powder, whatever; There's no point in using, right? 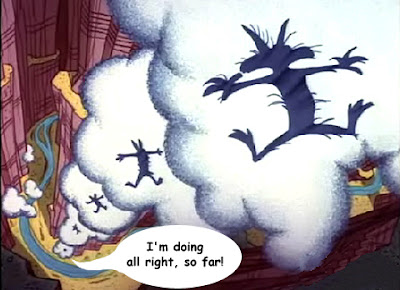 "I've been using these drugs for years and years, and although I don't need them, I enjoy them. I can put them down any time I want, but right now I don't want to put them down. And look at me. I have a job, a house, two cars, a family, money in the bank. Things are all right. Why should I do without?"

You ever hear the one about the guy who jumped off a two thousand foot cliff, and as he neared the bottom a passing eagle asked, "How are you doing?" As the fellow plunged down toward the rocks he replied, "I'm doing okay, so far!"

For those looking for a softer landing, pick up that phone and call that number. It's in the book. Who knows? They might just have a parachute that fits.
at April 27, 2012