SEEKER IN THE RAIN

There is an annual Narcotics Anonymous convention in Alfred, Maine mid-September every year. It's held at the Notre Dame Spiritual Center and the convention is called "The Miracle." If you're looking for king-sized beds, maid and room service, you are looking in the wrong place. At the Miracle, you make your own bed, clean your own room, and have a chance to open yourself to the worlds of fellowship, recovery, and spirituality. There are snacks, table tennis, and pool, too. Meals are prepared by the Brothers and Sisters and served at the dining hall. The food is good. No one has reported losing weight at a Miracle.

The convention is purposefully small. Several times the organizers and attendees have discussed moving the Miracle to a larger facility, and each time it has been brought up, it has been voted down. You see, at a small gathering, it's tough to hide in your room, becoming one of those invisible attendees who walk in fear of change. Those who come to the Miracle really want to get clean, stay clean, and advance in their recovery.  They may want to hide, but it's hard to do in Alfred.

At the first day of the first Miracle, I had a lousy time. The place was full of people I'd never met before, at one of the meetings I made a reference to something I had learned in AA and had been reamed out by a NAliban Nazi, the weather was gray, cold, and wet, and I was ready to get in my car and go home Saturday morning.

I remember sitting at breakfast on Saturday, huddled over my eggs and sausage, silently glowering around at the other addicts, wondering why no one wanted to sit with me. I mentally chewed over some of the things I had heard at the meetings on Friday, particularly a couple of Higher Power believers who kept repeating, if you need something from your Higher Power, all you need to do is ask. 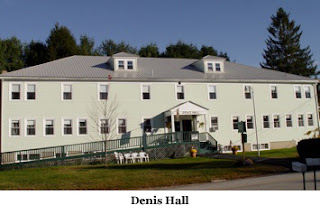 So there I was after breakfast, standing in the rain in front of the tiny cemetery the Brothers have there, trying to decide what to do. What did I need from my Higher Power?  I needed a sign. Okay, I thought, I'll ask for a sign. Fully convinced I was making requests to a nonexistent deaf ear, I mumbled sort of out loud, "Okay, Whoever you are, give me a sign. What do I need to know."

Well, no giant finger came down from Heaven and burned my answer in the flagstones with lightning bolts. I got zip, nada, nothing, which was what I secretly expected. It was dead quiet, except for the patter of the raindrops. Maybe the sign I need is already there, I thought, giving this fictitious power every chance. So, what can I see? I looked and shivered as the icy rain ran down my collar. And I answered, "Well, I can see I'm god damned cold and wet!"

What a bunch of crap. But then I happened to look to my left and saw Denis Hall, the main meeting place and dormitory for the Miracle attendees. I was cold, wet, and all alone standing in the rain. But it was warm and dry back there with all those recovering addicts. It was enough of a sign for me. That was the moment I became a part of the fellowship of NA.

On Sunday, before I left to return home, I walked down the lane to that place near the cemetery and made two deals with my Higher Power: First, that I would try my best to stay clean and work the program, HP taking care of the rest; and, Second, if I was clean that time next year, I would be back. I've returned every year since.


Do I want to move this convention to a big flashy hotel that can serve a convention of thousands rather than the hundred and fifty or so who squeeze into the Spiritual Center every September for the Miracle?  I don't think so. But, even if at some future date, it is decided to make such a move, come mid-September every year I'll be back at the Notre Dame Spiritual Center, standing amid the towering oaks on the lane to the Brothers cemetery. I made a deal with my HP to return every year that I was clean. HP has held up his end of the bargain; The least I can do is hold up mine.
at March 22, 2012

I love the meaningful ways you find stuff to do and way leads on to way,